I have written a quick introduction into the k40 Whisperer software and the main functions that exist within the interface.

1. Download K40 Whisperer software here and extract to a known location on your computer.

2. Click the k40_whisperer application to fire up the application
Image 3.After the application has opened you are presented with the following screen Initializes the Laser Cutter which sets the laser into a “Live” mode. The laser will become active and engraving can commence.

If the Laser if not initiated, then the laser will not be able to fire, or be moved on its axis.

Opens a range of file formats K40 Whisperer supports a range of vector and G-Code Files. Although SVG typically contains vector data, the software recognizes bitmap data and will import that along with any vector data within the file.

Reloads the current working file that is open in Whisperer. This is handy if you are playing around with settings and editing the file on a frequent basis. This function is generally to be used at the start of every operation to make sure the lasers home position is at its original of 0x,0y

Moves the laser to the 0x,0y position
Laser cutter must be initialized for this operation

The jog step is the distance the laser will travel (in mm) when one of the jog control buttons have been pressed. The jog control buttons move the laser in the corresponding direction. If the right button is pushed, the laser will move positive on the x-axis and 0 on the y-axis.

If the down arrow is pushed, the laser will move positive on the y-axis and 0 on the x-axis.

Each step will move in increments of the value that of the jog step text box. With this example, the k40 Whisperer software will move the laser in 10mm increments, as display on the jog increment text box.

The outer corner buttons move the laser to the furthest positions of the allowed cutting space.

The x button in the center moves the laser to the exact center of the cutting space.

These values represent the desired start point in mm. The laser will move to the desired destination in mm

Why would you need to move the x and y-axis?

Let’s say you have a piece of timber 150mm wide by 150 mm tall and you wanted to engrave a logo 60mmx60mm directly in the center of your timber like this : You would have to offset the starting x and y. To get the x values of the starting point use the following formula

This will align the logo directly in the center of your work.

If you were to engrave the logo starting at 0x and 0y then the logo will be engraved to the top left of your timber like this : Raster Engrave: The Raster Engrave function only receives raster data, so this will only control the speed of the x-axis.

Vector Engrave : Vector engrave moves the x and y-axis simultaneously, this is the combined speed number for both x and y-axis.

Vector Cut: Vector Cut moves the x and y-axis simultaneously – this is the combined speed number for both x and y-axis.

The button above will engrave your file at the designated speed. In this case, the laser will move on the x-axis only, covering 100mm per second

The Raster Engrave button will engrave all the content or image space that contains the color black (#000000 Hexadecimal for black). The Raster Engrave function receives image data using either bitmaps or vector data.

Unlike Vector Engrave or Vector Cut, the Raster Engrave functions more like a printer, moving back and forward over the x-axis, only firing the laser when it is required.

This process is much slower than Vector engrave and Vector Cut, as there could be a substantial time in between laser fires if the image has a lot of whitespace. Raster Engrave cuts are recommended for most applications.

The button above will engrave your file at the designated speed. In this case, the laser will move on the x and y-axis, covering 20mm per second

Enables the vector engrave function. All vector items within your .SVG file that are exactly blue (#0000ff Hexadecimal for blue), will be engraved at the current setting on the laser your laser engraver.

Vector engraving is recommended for outlining objects or text

The button above will Vector Cut your file at the designated speed. In this case, the laser will move on the x and y-axis, covering 10mm per second

Enables the Vector Cut function. All vector item within your .SVG file that are exactly red (#ff0000 Hexadecimal for red), will be cut at a constant power of 16% at 8mm/s throughout the laser cut.

This function should be generally used to cut through your material after the raster and vector cuts have completed.

If a vector cut is done before the Vector Engrave and Raster engrave function, the item you are engraving will either fall down into the waste area or become dislodged and a subsequent raster or vector engrave won’t be able to be completed.

Stops the current engrave
Note: This may take some time if laser data has already been sent to the machine

I have been using the K40 Whisperer since I purchased the K40 over a year ago and it has served me well without any issues. 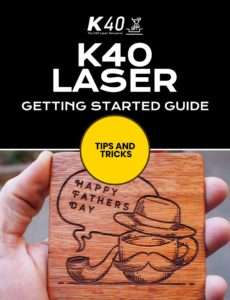